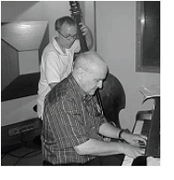 Born in the south west of France on December 28, 1943, Bernard Maury moved to Paris at the end of 1969 and began his career as a professional musician playing with the band of saxophonist, Michel de Villers at the Aux Trois Mailletz jazz club. He then went on to join the quartets of Michel Roques then Johnny Griffin at the Chat qui Pêche, the most dynamic Parisian jazz club at the time, where he accompanied several renowned American soloists. It was around this time that he met and subsequently became friends with Bill Evans.

At the end of the 1980s, he gave a series of concerts dedicated to Bill Evans in the form of piano duets with Warren Bernhardt, and headed up several musical ensembles. As of the early 1990s, he began to gain more recognition both at the national level – concert dedicated to the memory of Bill Evans to celebrate the second anniversary of his passing (Maison de la Radio); concert in honor of the Steinway Jubilee at the Champs Elysees (Paris), two duets with Toots Thielemans and Michel Petrucciani, piano trio concerts with Michel Grailler and Alain Jean-Marie (France Musique), and an “In Memoriam Michel Petrucciani” concert with Didier Lockwood (Gaveau Concert Hall in January 99) –  and on the international jazz scene – “Memphis in May” Festival (USA), Gratz (Austria), Tel-Aviv (Israel), Copenhagen (Denmark) and Los Angeles (USA).

As an arranger, he orchestrated the symphonic arrangements on “Parker with strings“, a compilation album paying homage to Bird, featuring Max Roach (drums), Frank Morgan (saxophone) and conducted by Michel Legrand (Halle that Jazz 89), as well as on René Urtreger’s album, “Serena” (1991). As a teacher, he gave a series of conferences at the Berklee School of Music in Boston (USA) and conducted several Master Classes in numerous universities both in America (Miami, Memphis, New Orleans, U.C.L.A.) and Europe (Gratz, Bologna, Genoa, Milan, Vienna, etc).

In France, he was a regular guest in concerts and educational radio broadcasts for France Musique and France Culture (“Le matin des Musiciens”, “Les Démons de Midi”, “De Vous à Moi”, “Carte Blanche à Martial Solal”, etc.). Bernard also served on the juries of the Toulouse and Tours Universities thesis review committees for jazz-related studies. From 1993 to 1996, he was in charge of the “Pedagogical -Teaching” commission of the French Jazz Musicians Union (UMJ). In September 1994, he founded and became the director of the Jazz department of the Music Conservatory in the IXth district of Paris (Conservatoire Nadia Boulanger) and in July 1996, he co-founded the Bill Evans Piano Academy with Samy Abenaïm.

Born in Mogador (Morocco) in 1949, Samy Abenaïm studied piano at the Casablanca Music Conservatory where he received his first “prix de perfectionnement” in 1967.

He then went on to study harmony, counterpoint, musical analysis, piano instruction, ethnomusicology, contemporary music techniques and acoustics, etc. at the Music Academy of Tel-Aviv where he stayed until 1973. During this time he became interested in all forms of teaching improvised music.

In 1979, he moved to Paris and frequently performed in Parisian jazz clubs. He joined the CIM jazz school as a teacher in 1980 then, with Bernard Maury, co-founded the Bill Evans Piano Academy in 1996.

Samy Abenaïm passed away in June 2000.

“Transmitting knowledge is an essential concept. The issue here is not only to transmit knowledge in an integral way but to ensure that the information has been accepted, received and integrated. The goal of the school is to perpetuate the culture of jazz which has a tendency to stagnate. We want to enrich this culture by integrating everything the piano has to offer musicians in the twentieth century (….). Our school is focused on improvisation and everything that enriches it. Improvisation is a culture all classical musicians stand to benefit from; a culture that will help them approach and interpret music in a less rigorous manner.”