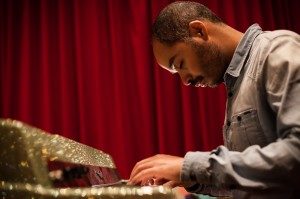 Philippe Baden Powell de Aquino is a Brazilian pianist, born in Paris on 5 April 1978. Pianist, composer and arranger, Philippe began studying music at the age of 7, focusing firstly on classical music, then, under the guidance of his father, Brazilian guitarist Baden Powell, on harmony and improvisation.

He has also studied with Antonio Adolfo, Edson Elias, and Luiz Avellar and participated in several master-class sessions including those of US pianists Lynne Arriale and Kenny Werner. Philippe made his debut as sideman accompanying such artists as Flora Purim and Airto Moreira, as well as Maria Bethânia and singer/actor Seu Jorge (Cité des Dieux, Life Aquatic).

In 2005, he was awarded 3rd prize at the Montreux Jazz Piano Solo competition and in 2006 recorded his first album, Estrada de Terra/Dirt Road with the New York label Adventure Music, which received very favorable reviews in the press and notably in Downbeat Magazine which gave it a 4-star rating.

His music is at once rooted in the Brazilian tradition and open to other musical cultures, notably jazz and classical music.