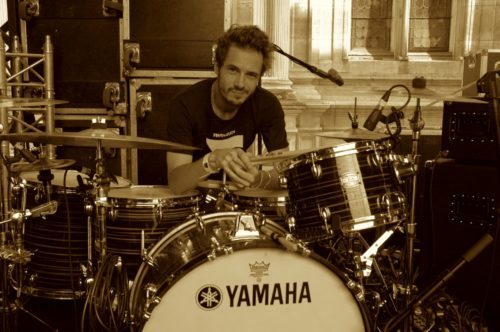 Born in 1977 in Agen in the South West of France, Matthieu Chazarenc began drumming at the age of 6.

Between 1990 and 1995, he studied classical percussion at the Conservatory of Pau then moved to the CMCN (Centre Musical et Créatif de Nancy) in 1996 for almost a year to study under Frank Aghulon and André Charlier and won the class prize for his year.

In October and November 1997, he took private classes with John Riley and the Drummers Collective School in New York.
During the next three years, he pursued his training at the National Conservatory in Toulouse and played in several regional groups (big bands, MOR orchestras, marching bands, batucadas, etc.)
He graduated with a State Diploma in drumming and, by unanimous vote, was awarded the First Prize.

In September 2000, he studied drums under Daniel Humair at the Paris School of Music and Dance (CNSMDP).   In June 2003, he obtained the First Prize (with honors).

In 2005, Matthieu spent several months in New York where he took private lessons with Jeff Ballard and Ari Hoenig.

Matthieu currently lives in Paris and regularly plays in jazz festivals and clubs in France and around Europe.

He directs the drum master classes during the Coartjazz summer internship in Coaraze in August.

He has been teaching at the Bill Evans Piano Academy since 2014.